This community-valued project involved environmental screening, preliminary engineering, and final design for the rehabilitation of the Centerway Arch Bridge, a historically significant, seven-span, concrete, and earth-filled arch bridge originally constructed in 1920. The bridge is an important historic resource and link between the Corning Museum of Glass on the north side and Historic Market Street on the south side and preservation of this structure as a valuable community centerpiece and resource was a primary goal for the City.

Fisher Associates conducted an extensive structural inspection of the existing seven-span bridge to determine the extent of deterioration and the needed improvements. The inspection included a 100% hands-on inspection of the concrete arch, concrete spandrel walls, piers, and abutments, a visual inspection of the parapets and deck, and a Service Life Assessment. Once the issues were identified, our structural engineers proceeded with identifying alternatives for repair, developing cost estimates, preparing the design report, and progressing with final design documents. Alternatives for aesthetic improvements to the bridge were also evaluated that incorporate the historic character of the original bridge.

Among the innovative methods used in the inspection process was the use of lidar to map all of the cracks, spalls, core locations, and hollow areas detected by sounding and sampling. In lieu of hand measurements and mapping in the field, the inspection team used reflective paint to outline and label the limits of hollow areas and to delineate cracks. Fisher’s survey team next performed a lidar scan from the riverbed on both sides of the bridge. The scans were then combined and rendered, and a three-dimensional model was created indicating all of the lines picked up by the scans. By using this approach the team saved valuable time in the field, and the cost of rental equipment for conducting inspections beneath the bridge was reduced. The lidar scan was also used to quantify areas of delamination and the lengths of the cracks mapped by the team so as to provide an accurate account of the repair areas. This technique proved vital in limiting overruns of material quantities in the repairs and therefore saved money.

The design for the rehabilitated 40-foot wide bridge deck includes a 12-foot wide multi-use trail along the east side of the bridge, a five foot wide walkway along the west side, and green space with plantings along the remaining middle swath of the bridge to create a park-like setting on the bridge. Alternatives for aesthetic improvements to the bridge were also evaluated that incorporated the historic character of the original bridge. Interpretive signage highlighting the history of the area, benches, stamped concrete, a sprinkler system, and hose bibs were also included on the bridge along with a painted maze and other interpretive games. The plaza area at the north end of the bride was redesigned to complement the historic character of the Market Street District at the south end of the bridge.

SHPO coordination was critical as the bridge is historically significant and is adjacent to the historic Market Street district. Parallel activities were coordinated with the NYSDEC and the USACOE to obtain a permit for work within the river. 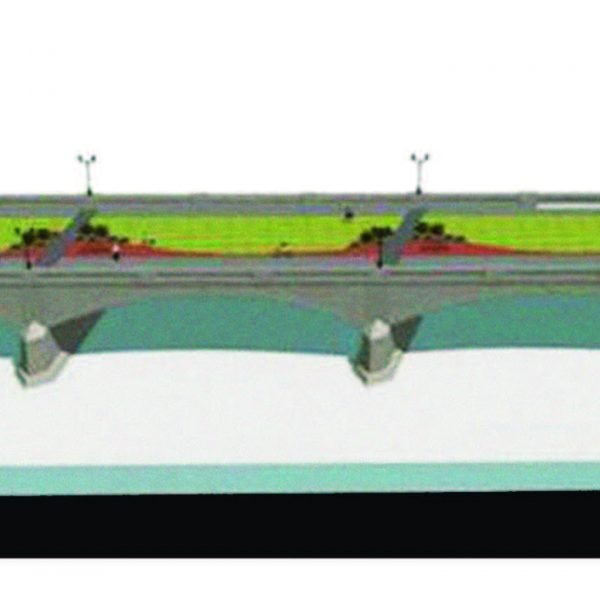 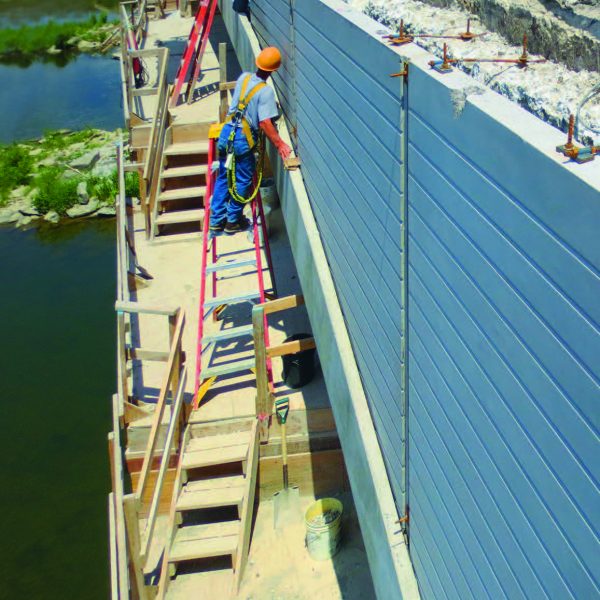 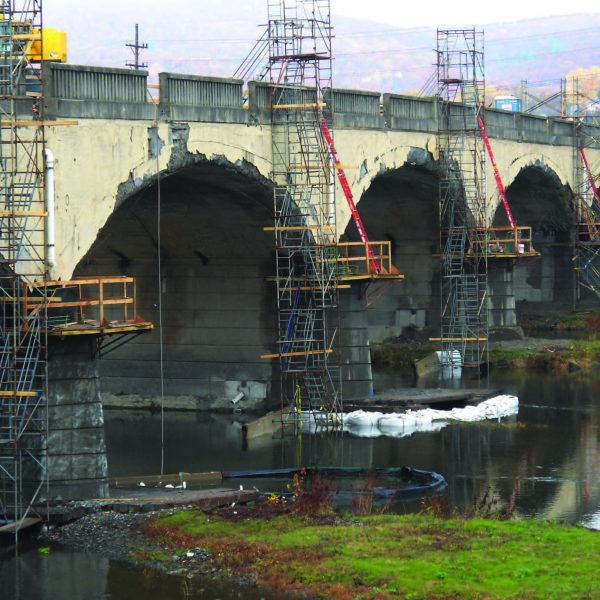 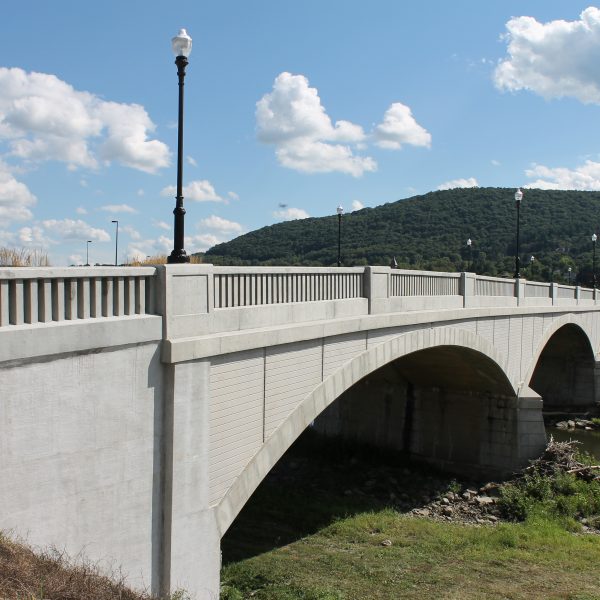 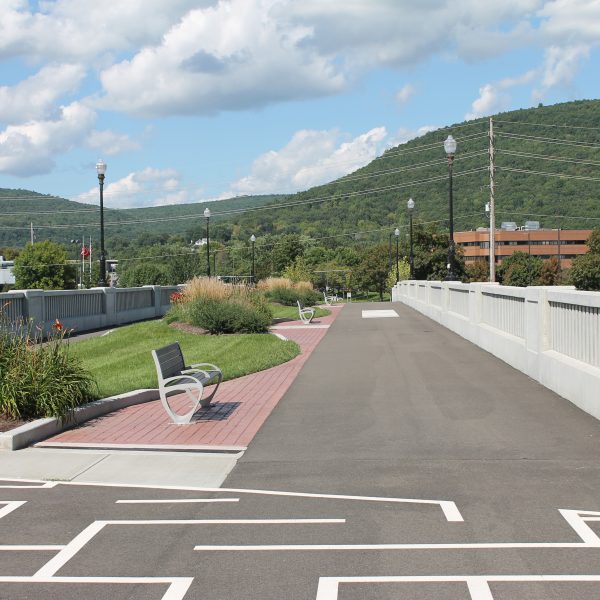 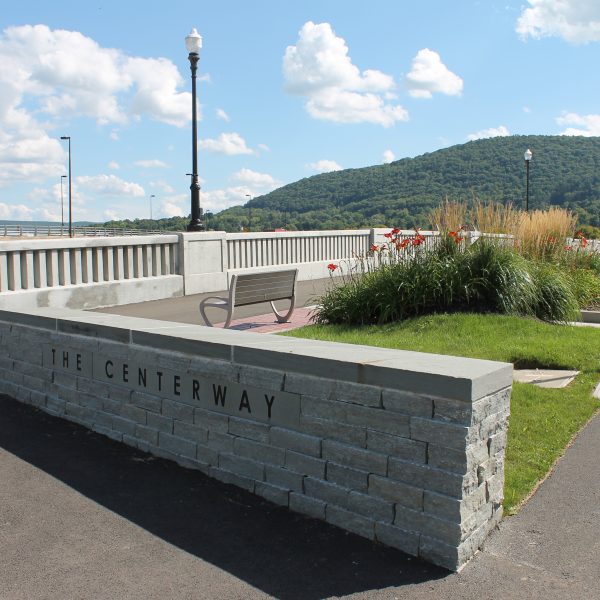 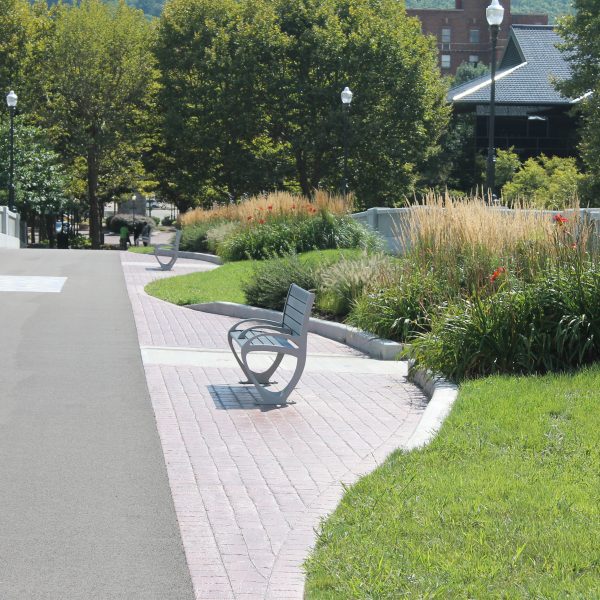 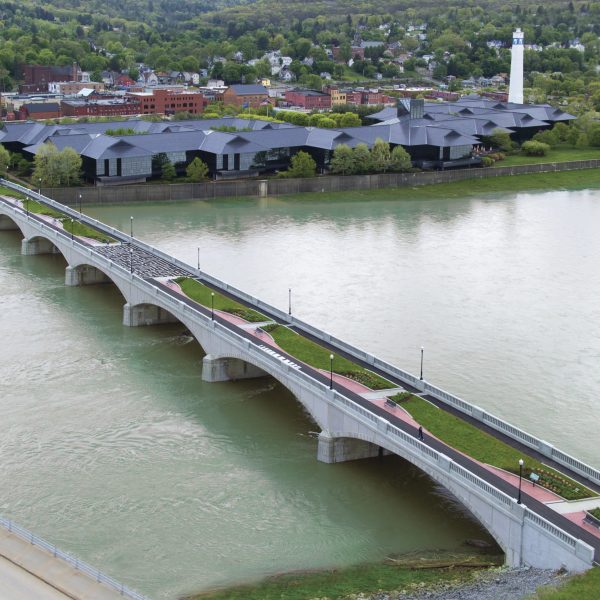 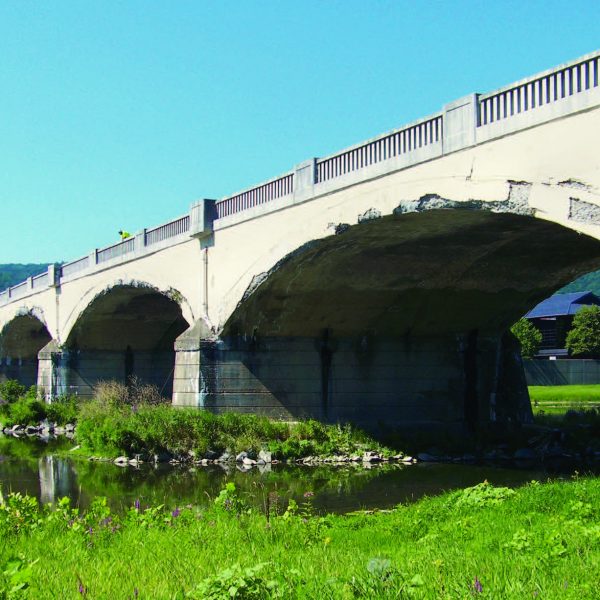