The Niagara Viaduct was originally constructed in the mid-1950s and is a six-lane, 113 span multi-girder bridge that carries Interstate 190 northbound and southbound on the south side of the City of Buffalo. Sections of this viaduct cross over various streets, sidewalks, and public parking lots. In 1998, the bridge deck in the project area was reconstructed and widened to add to the available shoulders and to provide concrete parapets on the mainline and ramps. Work included removal of the deck surface to at or below the top mat of reinforcement with some limited full-depth reconstruction.

Fisher was retained by the Thruway to provide structural inspection, testing, and evaluation of the northern 43-span segment of the Niagara Viaduct and two connecting ramps in the City of Buffalo, NY. The goal of this project was to identify critical areas of the deck underside where a high potential exists for property damage or injury from falling deck concrete and provide a detailed repair scope and quantity for reconstructing the underside of the bridge deck.

An in-depth inspection of the underside of the concrete deck was performed to identify and quantify delamination, spalls, corroded reinforcement, and wet areas and cracks that had been previously inspected and sounded, with the goal of assessing the structural integrity of the deck and the risk to pedestrians, vehicular traffic on streets below, and vehicles parked in various parking lots below portions of the bridge. The inspection methods utilized were visual, taking advantage of the concrete sounding marked on the underside of the deck and visible from the ground which was performed during previous biennial bridge inspections through 2013.

The below-deck visual condition inspection was supplemented by the use of Ground-Penetration Radar (GPR) scans of each lane and ramp within the project limits, Thermal Infrared (IR) imaging, and creation of composite photos of the deck using video documentation. GPR scans produced plots of internal deterioration from the top of the deck not attainable through visual or more labor-intensive non-destructive testing techniques such as chain dragging, impact-echo, or impulse response. The GPR scans and video documentation were performed at highway speeds, eliminating the need to close lanes on a high-volume highway. The extent and depth of deterioration found using this approach, verified by concrete coring and testing, facilitated the assessment of the overall condition of the deck for top, bottom, and full-deck repairs. 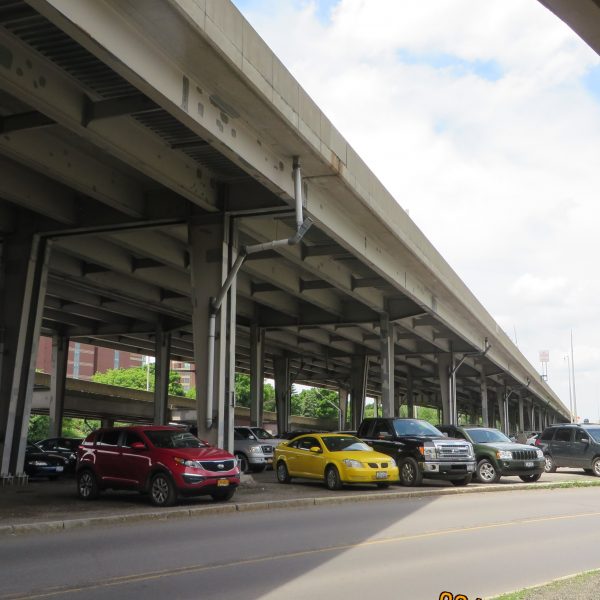